Director of “Love You Forever”
PROGRAM 7

What inspired you to make “Love You Forever”? What were some challenges?

The immensity of love that I have for my sister was the biggest inspiration to making Love You Forever. To be specific, I had a horrifically vivid nightmare that my sister was missing and I couldn’t find her, only to learn she was dead in the end. I woke up bawling my eyes out, so then I called her to tell her about it, and she coincidentally was with Hana (our cinematographer and best friend), and out of some kind of hysterical panic I was like “let’s make this into a film, this feeling is too strong.” Both my sister and I are trans, and though we love each other deeply, the differences in our personalities hold an inherent conflict that also made for an intriguing on-screen relationship. Sepehr is extremely bold, and doesn’t care what anyone thinks of her. She knows she’s the queen, and she’s got a razor sharp attitude about it. I, on the other hand, am extremely anxious, self-minimizing, and not very upfront about my femininity in public. There’s envy in this dynamic, but also mutual astonishment and admiration of each other. But back to the film—it’s about the horror of loving someone so much that you constantly fear their death. My friend Nimmy called it “pre-grieving”, and all those red light scenes depict the internal realms of anxiety and how they project out onto real life-situations, where you can’t fully enjoy the company of loved ones with such fatalistic thoughts in your head all the time. This is especially harsh when you’re part of a demographic where our mortality is always in a state of reckoning.

The challenges were all very technical. None of us had ever really created a narrative film of this scale, and the technology was formidable. We had borrowed a camera from Stone Dove Productions that we barely knew how to use, but we attached a cheap rode mic to it and just went for it. The soundtrack was created all on analog synths and drum machines which was a whole other mountain of work (next time we gotta use software). Really though, I think that for a three person crew (where two of us were also the actors), we did an amazing job creating a movie with such a complicated narrative. I assume that challenges in filmmaking will continue to be access to resources, but then again, being honored as part of this SF Trans Film Festival, it shows you that if you create from an authentic place, many of the technicalities can be bypassed with good storytelling at the forefront.

I think we’re on the verge of seeing incredible things in this lifetime. The films and the talent already exist (as we’ll all witness November 12-15), but they’re just not broadly visible or palatable yet, which echoes a personal narrative that I think most trans people can relate to. I think the current state of trans/gnc filmmaking is full of hope though. The process of unearthing our stories is already in motion, and we need to affirm ourselves beyond the judgement of mainstream media that our voices are important, that we need to do this. Really, the most important aspect of filmmaking isn’t monetary success or the accolades, it’s about the community you create through collaboration. Trans people have survived societal estrangement and abuse via our connections to one other, and the amazing part of filmmaking is that it provides a tangible opportunity for us to interface and create potent works of art. But above all, it’s pretty explicitly known that trans people are both underrepresented and/or negatively depicted in media. The trans apparatus from film to reality via the cis imagination has caused a lot of problems for us this way, because the public understanding of us mostly comes from film and media. As filmmakers, we can facilitate the accountability for this by offering authentic stories in place of the sensationalized garbage we’ve seen all our lives. I feel so lucky to know that there are others who are currently working to make this happen, and forging a path for me and other emerging filmmakers to come through. Anyway, I think that the current state of trans/gnc filmmaking is that we’re all each other’s biggest fans, and the more we commit ourselves to it, the more it inspires others to pursue their own dreams. With that, I also wanna shoutout to Pooya Mohseni, the first trans Iranian actress I’ve seen in film (Terrifier, 2016). That meant a lot to me, and motivated me, thank you joonam.

You absolutely deserve to feel like you’re a part of this narrative, even if you just wrote a monologue and recorded yourself on a phone performing it. You created a seed, an idea, a launching pad for more. I know that it may seem discouraging to pursue artistic ventures, but if filmmaking brings you joy, or if it’s something that helps you feel whole, then please do it. Honestly, I’m giving this advice to myself as well, because I’m always second guessing myself and the validity of my work. I never knew that making a movie was possible, and even though it’s a little short film, it feels like everything to me. Don’t let self-doubt or high expectations stop you from creating the “everything” for you. And on a personal note: learn screenwriting, because that’s where it all begins! It’s hella fun, and it’s my main focus. I’ve written four features so far—each seems to get better. If anyone needs pointers on getting started with screenwriting, email me at sepmashiah@gmail.com with questions <3 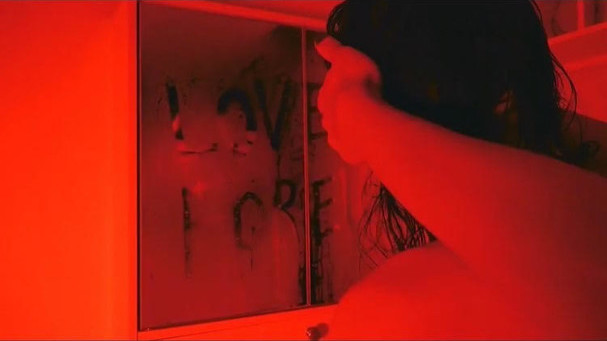 Stuck within the time loop of ritualistic trauma, this film is an experimental horror film that takes place within the spectral plain of “Trans Girl Ether”, amplifying the palpitations of loss, grief, abandonment, and trauma. This story follows two sisters navigating defeatism and nihilism, conquering their fears of one another to learn the unending power of their bond.