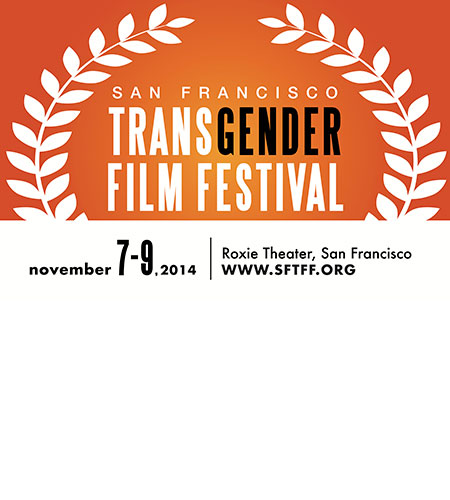 TICKETS NOW ON SALE! The San Francisco Transgender Film Festival (SFTFF) returns to the Roxie Theater for our 2014 Festival – a stellar weekend of transgender films. Full program information and listings below. Advance tickets are recommended for this very popular Festival!

WANT TO GET INVOLVED? Contact us for volunteer and donor opportunities!

Shot at the Vancouver Aquarium this film enthusiastically loves on the magical and ancient jellyfish. The film highlights the jellyfish’s bizarre traits including its gender free existence, non touching sex and its spooky immortality. Directed by Coral Shor

From Northern Ireland, Adrianne and Karl, a transgender couple, both diagnosed with Asperger syndrome, confront their own Gender identity and find salvation in each other as their relationship blossoms and changes their lives. People who are different strive for the same things as everyone else. ‘Butterfly’ is a unique and heartwarming story about the human condition, about acceptance and feeling part of a community. Directed by Stuart McLaughlin.

Exploring “self-reflections” in the empire of information and images, this film presents an unsettling assemblage of cultural texts on Thailand that often pass as common sense. Directed by Bo Luengsuraswat

For the last 20 years, Phatima Rude has pioneered the performative alternative queer punk drag scene that has now become internationally famous, yet Phatima remains on the fringe of society, living out of a van. This gritty and intimate documentary follows Phatima’s struggles and triumphs with illness, poverty, addiction, and gender identity. Directed by Paul King

You’re Dead To Me

A grieving Chicana mother confronts an uninvited family member before her Día de los Muertos celebration. By night’s end, death offers her a choice that she couldn’t make in life. Directed by Wu Tsang

From Australia, A story of transition – from male to female, and from despondency to happiness. Using recorded interview material and representative artwork, this short touches on the fear and loneliness of living in the closet, and the joy and confidence that comes with stepping into the light. Directed by Igor Coric & Sheldon Lieberman

At 92, Robina Asti, a WWII veteran and pilot, tells her story of living as a transgender woman since 1976 and her fight to be treated like any other widow. Directed by Leslie Von Pless

Director Cheryl Dunye’s BLACK IS BLUE is a powerful look at stealth trans man security guard who is forced to resolve some unanticipated inner conflicts from the past.

In this gritty, contemporary, romantic drama set in London, Adam meets Rocky, a handsome and mysterious drifter. As the pair gets closer, Rocky seems eager to reveal a secret that Adam is not ready to hear. Silence abounds until one explosive night changes everything about the way they feel about themselves and each other. Directors: Alicya Eyo, Sophy Holland

Against the Grain transforms the canon of documenting gender transformation, breaks the script of the gender binary & the linear racial focus. Against the Grain follows the story of OluSeyi, a cultural organizer, artist, healer, & Queer Nigerian whose spirit is transcending gender. While documenting a gathered of gender non-conforming & transgender People of Color. People discuss what it means to be “us”, engaging the complexities of our race/class/gender/ sexuality/ gender expression in this white supremacist/ patriarchal/ capitalist society. Directed by Seyi Adebanjo and Betty Yu

CJ and Ash are an unlikely pair who randomly meet up for a sexual encounter but end up spending the whole night together playing a revealing game where both get more than they bargained for. Directed by Dominic Haxto

I Am the Transcender

To Type Out Your Name

“To Type Out Your Name” is part 9 of “Detours & Fences” – an ongoing video series that traces trans identity, family legacies, and heartache through landscapes, collected objects, and punk rock. To grasp: to apprehend; to clench; to enclose; to fathom; to keep; to know; to perceive; to seize; to take hold of.
Directed by Malic Amalya

We’re shining a spotlight on a prolific member of San Francisco’s creative arts scene.
Active as a performer since 1996, Heklina stages theater versions of film and sitcom re-enactments, while producing and hosting shows and events all over the world. From his early years in Iceland to his emergence as a premiere performer in the drag scene in San Francisco and beyond, we ask: What motivates Heklina to create? Directed by Brian Favorite

BEYOND THE MIRROR’S GAZE

A couple get to know each other by exchanging body parts at will. Canada. Directed by Iris Moore

What if we could turn places of trauma into places of pleasure? What if we could close our eyes and dream, what if sound guided us through our fantasies? What if our heart beats were louder than halting stops, if we were open to love in scary places?  In Going Here, Lyric and Jiz explore the edges of danger, public sex, experimentation, and lust. Featuring Jiz Lee and Lyric Seal. Directed by Courtney Trouble

PUT the NEEDLE on the RECORD

Remember that one person from high school… so hot EVERYONE wanted to fuck them, but no one dare try? For these four friends that person was Samantha, and as they get high and spin vinyl, one of them claims to remember her just a bit better than the others. Terry lifts the narrative needle, but are they just looking to repeat a past track, or get into a new groove? A soft-core short film directed by Shine Louise Houston. Stars: Drew DeVeaux, Andre Shakti, Ex Libris, Nikki Darling, Dylan Ryan

Domino and Rain are genderqueer buddies who make their living performing hands-off fetish acts. When a client breaks the rules, the duo must decide how to handle their business. Director: Maria Breaux

Actor and Director Ziggy Montford takes the viewer back to the day when Leather Men cruised the bath houses of San Francisco.  While cruising, Leather Sir Ziggy finds Bootblack Ragged Dick and gets his boots serviced.  Ragged Dick gets serviced in the process. Both actors are title holders and developed their scene from experience and fantasy. Another classic from T-Wood Pictures

Transforming Family, directed by Rémy Huberdeau, tackles the current conversation among trans people about parenting, capturing the struggles and strengths of transgender and gender fluid parents to be.

This film explores the experiences of trans elders, providing wisdom on the ageing prcess. Directed by Joe Ippolito

This film is the story of Dale Micheals, a transman living stealth until a game of basketball changes everything. Directed by Terésa Dowell­Vest

The riveting life journey of an out transwoman truck driver as she drives across life’s highways. Directed by Beau J. Genot

Lyrically poignant yet contained this film is an intimate piece that combines personal subjectivity with the clinical objectivity of medical reports, challenging the very notions of these categories. The film is partly based on the author’s psychiatric assessments diagnosing her with ‘Gender Identity Disorder’, in accordance with the International Classification of Diseases. A deep reflection on the too often abusive authority apparatuses such as state, law and psychiatry. Directed by vika kirchenbauer

“Forever’s Gonna Start Tonight: The Vicki Marlane Story” chronicles the remarkable experiences of drag superstar Vicki Marlane. From her roller skating and cross dressing youth, through the adventures that led to her being San Francisco’s “Toast of the Town” in the early ’70s. Produced by archivist and historian Kim Klausner (It’s Elementary:Talking About Gay Issues In School) and Emmy Award-winning Susan Stryker (Screaming Queens: The Riot at Compton’s Cafeteria). Directed by Michelle Lawler.